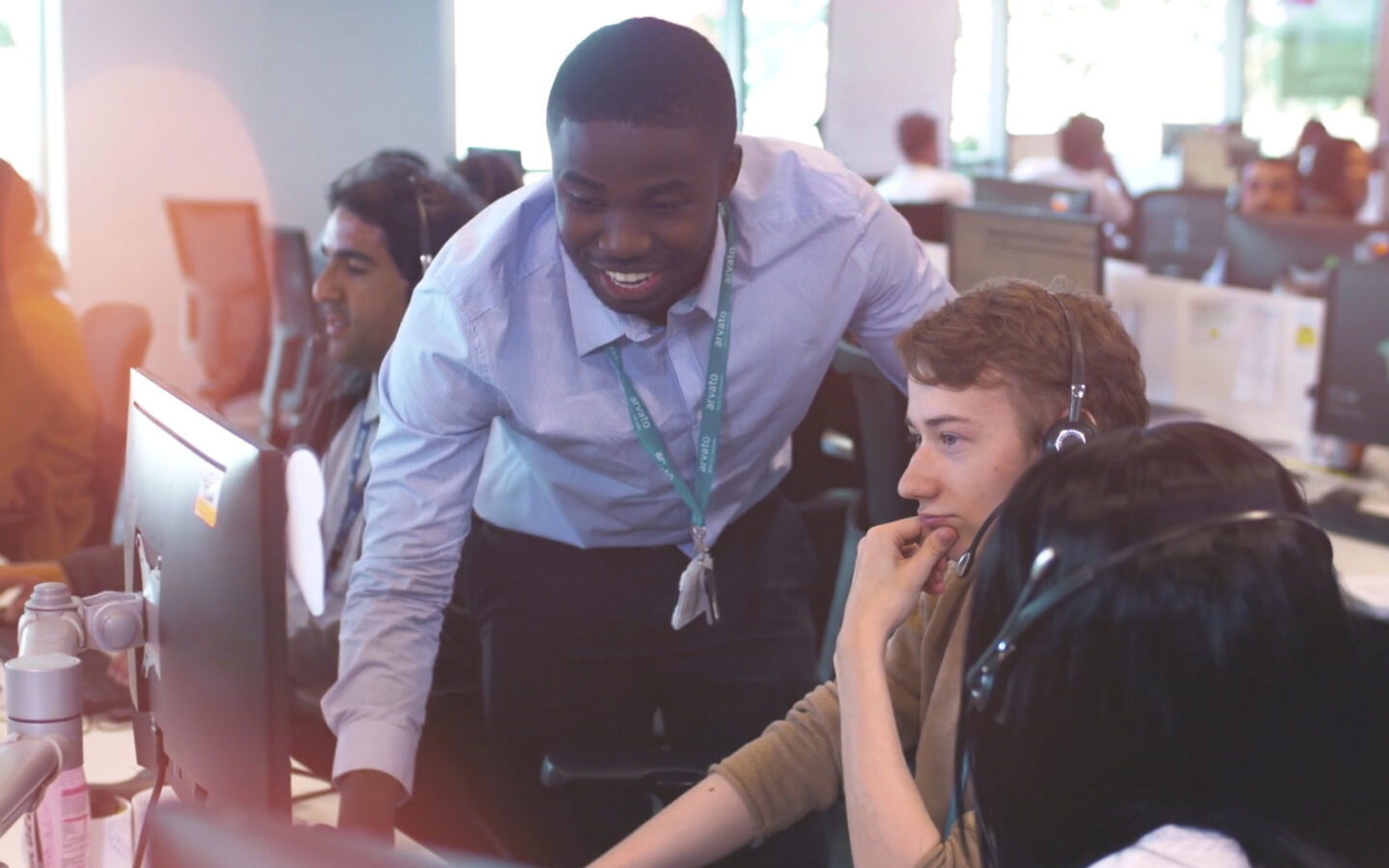 Arvato have been our client for a number of years now, and we have created a variety of video content for them, from social media to brand films, presentations and internal communications. The most successful of our projects – that people still talk to us about now – are the Employee Stories series.

In a nutshell, we’ve created a series of 13 videos, each focusing on an individual employee.

Arvato CRM Solutions has several offices around the UK, providing award-winning customer service and business process outsourcing (BPO) across both the public and private sectors.

With over 1500 employees in the UK, they are constantly looking to attract new talent to the business. But besides using video as a recruitment tool, the marketing department saw this as an opportunity to generate internal company engagement, allowing employees from one side of the country to get to know their fellow colleagues hundreds of miles away.

No individual’s experience is quite the same, so we pitched the idea of creating ‘a day in the life’ series of videos. Covering a variety of roles and locations across the organisation, we wanted it to be as inclusive as possible, and feature a range of different personalities.

The risk with any project like this is that individuals suddenly feel uncomfortable and freeze up when they find themselves in front of the camera, so in drafting the concept we decided the following:

1. All interviews would be made off-camera, recorded as audio-only. This would put the interviewees at ease and allow them to offer a more natural, genuine testimonial.

2. We would adopt a ‘fly on the wall strategy’ when shooting b-roll – no person would be asked to role-play or stage a ‘working scenario’. Instead, they would simply carry on as normal, conducting real work tasks. When they took coffee breaks, we would join them and their colleagues to capture their natural interaction. There would be as little intervention or direction from us as possible – we wanted them to feel as relaxed as they could.

Doing a video for each person, as opposed to an overall employees’ video, was due to two reasons. First, it felt more personal that way – we could spend more time with each person getting to the heart of their experience, and give candidates a deeper insight into what it is really like to work in the specific role they are interested in. Second, from an engagement perspective, people are more likely to watch shorter 60-120s videos than they are a three to four minutes piece online. And we definitely wanted to prioritise the viewer’s experience and ensure they gained value for their time.

The production process was very much in collaboration with the Arvato team. They ‘recruited’ the employees for the videos and took care of the locations, logistics and schedules. This was fantastic, as it took some pressure off our shoulders on the day and allowed us to be completely focused on the creative side.

The idea we wanted to get across was how exciting someone’s day can be like whilst working at Arvato, however a lot of work is done on computers, which is not particularly interesting from a cinematic point of view. As such, we devised a questionnaire beforehand and sent it over to prospective participants. The goal was to learn more about them, their interests and – most importantly – their job role. We were then able to use their answers to tailor a shot list for each person’s video.

Another important part of the films was to reflect the social aspect of working at Arvato. We did this by filming “coffee breaks”, where a number of colleagues/friends came together and had a relaxed conversation.

When we got to the post-production stage, we meticulously chose different music tracks to match the aspirational feel we wanted to create for the films. The structure and pacing was also of utmost importance, and we added the subtle touch of light leaks to further enhance the uplifting tone.

Right after the launch, the client shared with us how well received the videos were, and they continue to be highly effective in supporting their recruitment programme (the top videos can be found on their careers page).

Since then, a lot of social media assets have been created based on the original footage, such as employee’s quotes, mini-clips and stills being used for marketing materials. We’ve also worked on other major film projects for Arvato and reused this footage to enrich the most recent films, such as “What’s it like to work at Arvato?” and “Virtual tour of our offices”.

“The Seveer team have really helped to bring our employer brand and company values to life, emphasising why people should work for us, by focussing on different employees and their stories. These are not only helping to showcase our culture, recognise and celebrate our people but also support with recruitment. The films were delivered on time, to budget and were such high quality that they’re still being used and receive positive feedback today!”

We’d like to say a huge thank you to Arvato for their continued support and trust in our work, and for the testimonial they supplied for this case study.

Do you have a new project?

We'd love to hear from you

All fields marked with (*) are mandatory.
We will be in touch soon about your project.